One night a friendly stray cat showed up at the door of a workplace and asked to be let inside.

About a month ago, on a rainy night, Kay was in her office when she heard what sounded like a cat outside the door. She approached the screams and saw a tabby meowing desperately and begging to be let inside.

She immediately contacted her roommate, Lauren Keim, for help. “It was rainy and very cold so we knew we had to bring him in for the night at least,” Lauren told Love Meow.

“I met Kay at work with our other roommates to take him home. We gave him a bath. We were all sitting on the floor as he explored a room we had set up for him.” 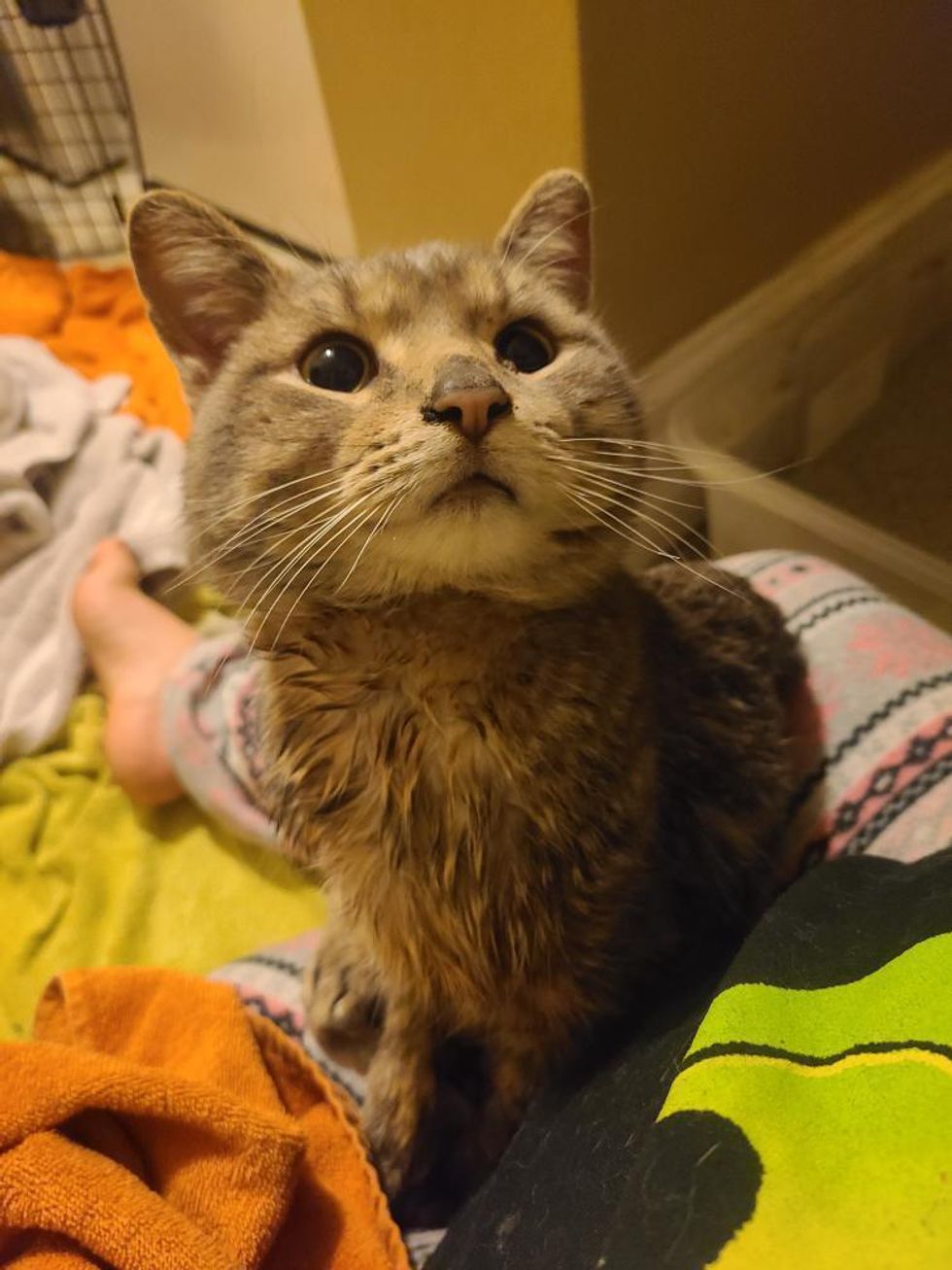 The cat was very skinny, dehydrated, hungry, and rough around the edges. As soon as he got a bowl of food, he devoured it in a minute.

Just as they were debating whether to find a way to help him, the cute tabby curled up in Lauren’s lap and dozed off with his face in the blanket.

“He crawled into my lap and fell asleep. I knew he was mine then. I feel like he picked me at that moment,” shared Lauren Love Meow. 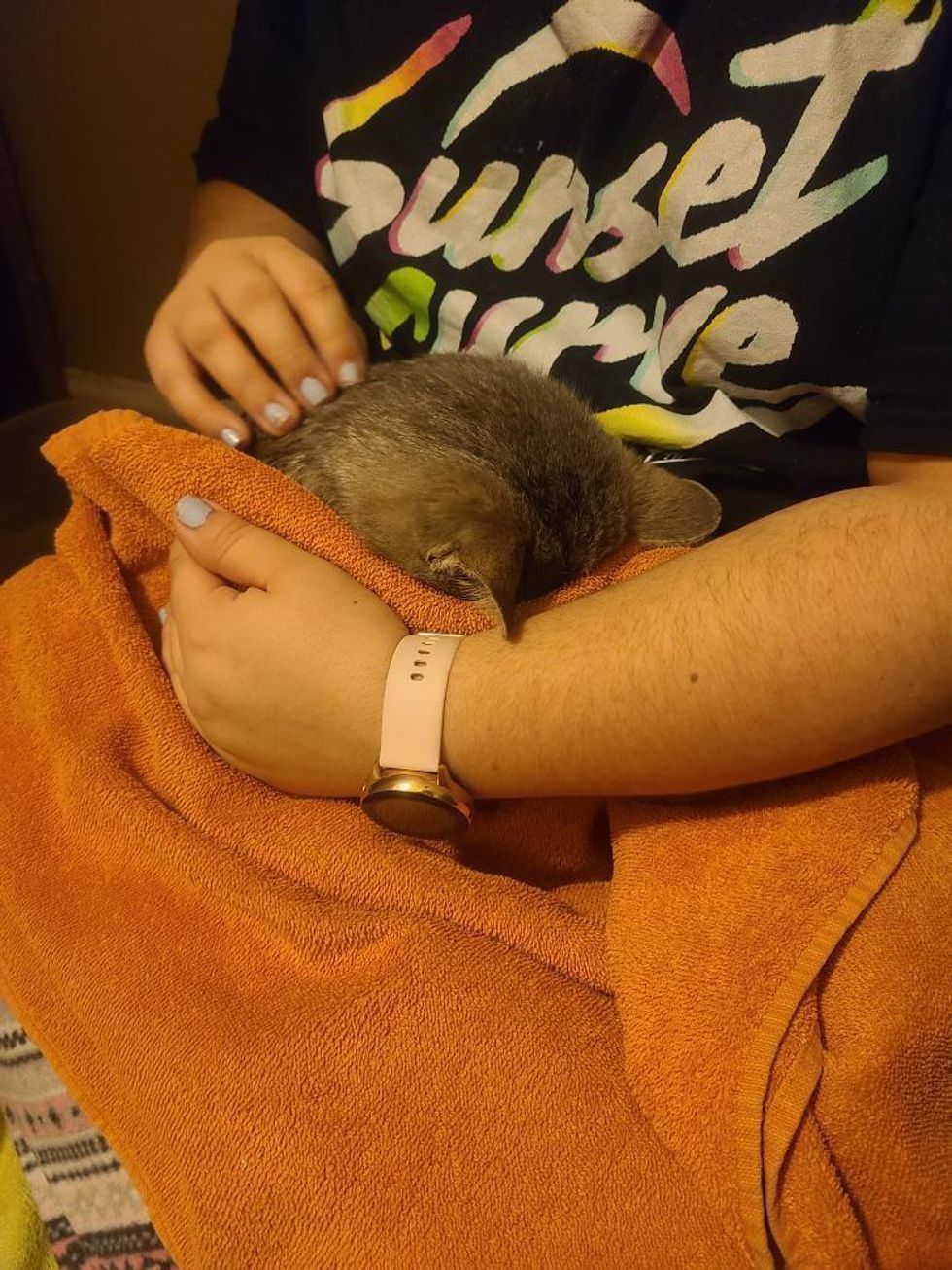 Chuck cuddles with his forever human

They decided to name him Chuck after the CEO of the company where he was found.

At the vet, Chuck was estimated to be 1-3 years old and he didn’t have a microchip. They found an abscess on his foreleg, most likely due to a bite wound infection, and also found that he had a broken hind leg that needed amputation. 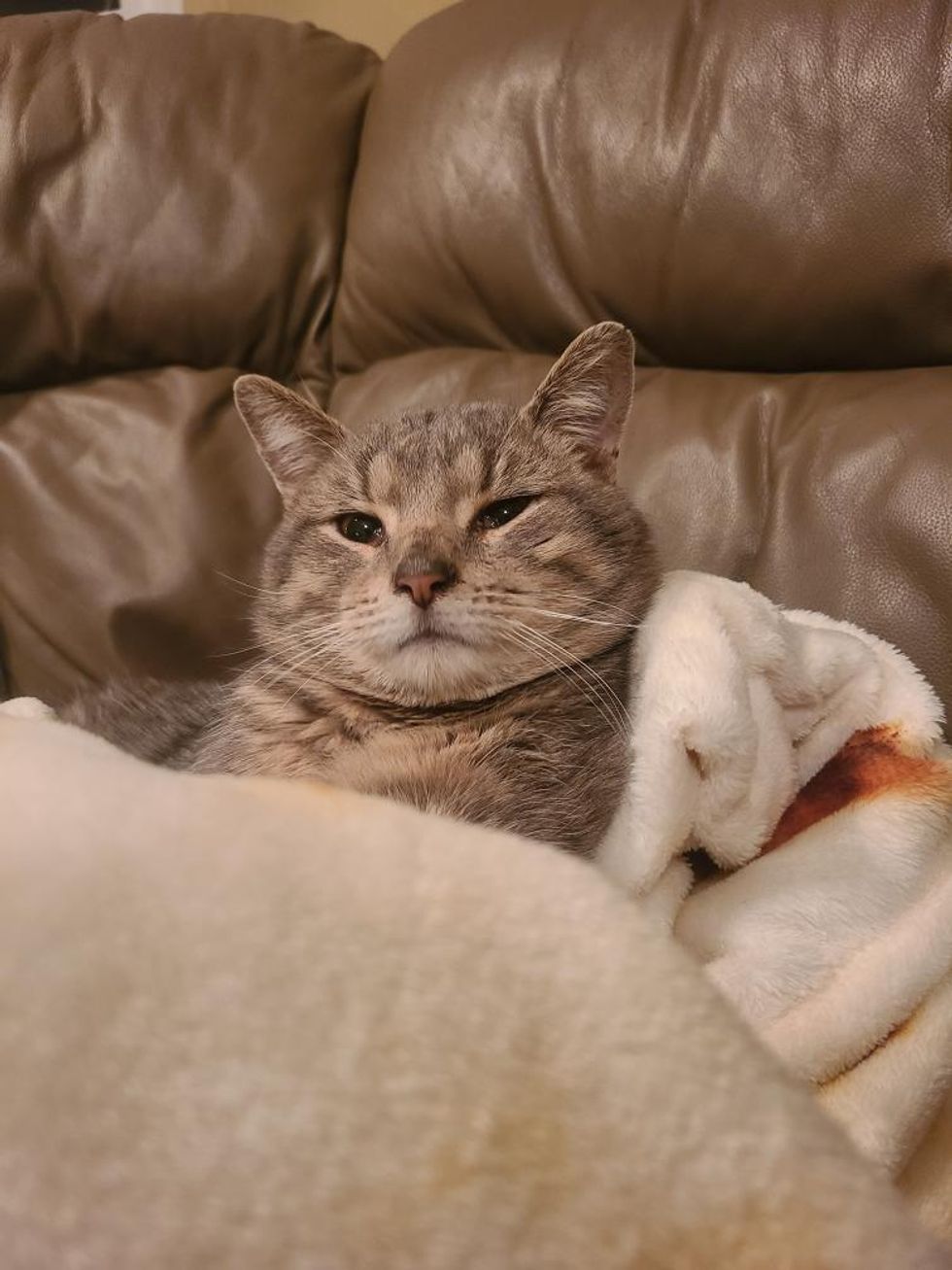 The vet believed the cat had lived with the broken leg for a long time and that the operation would improve his quality of life. Chuck was a champion during all of the visits and was so grateful that he was helped.

Check out Chuck and his journey in this video:

“He’s getting used to life after his three-legged operation, but he’s moving faster now than when we found him,” Lauren told Love Meow.

As Chuck continues to heal, his true personality emerges. 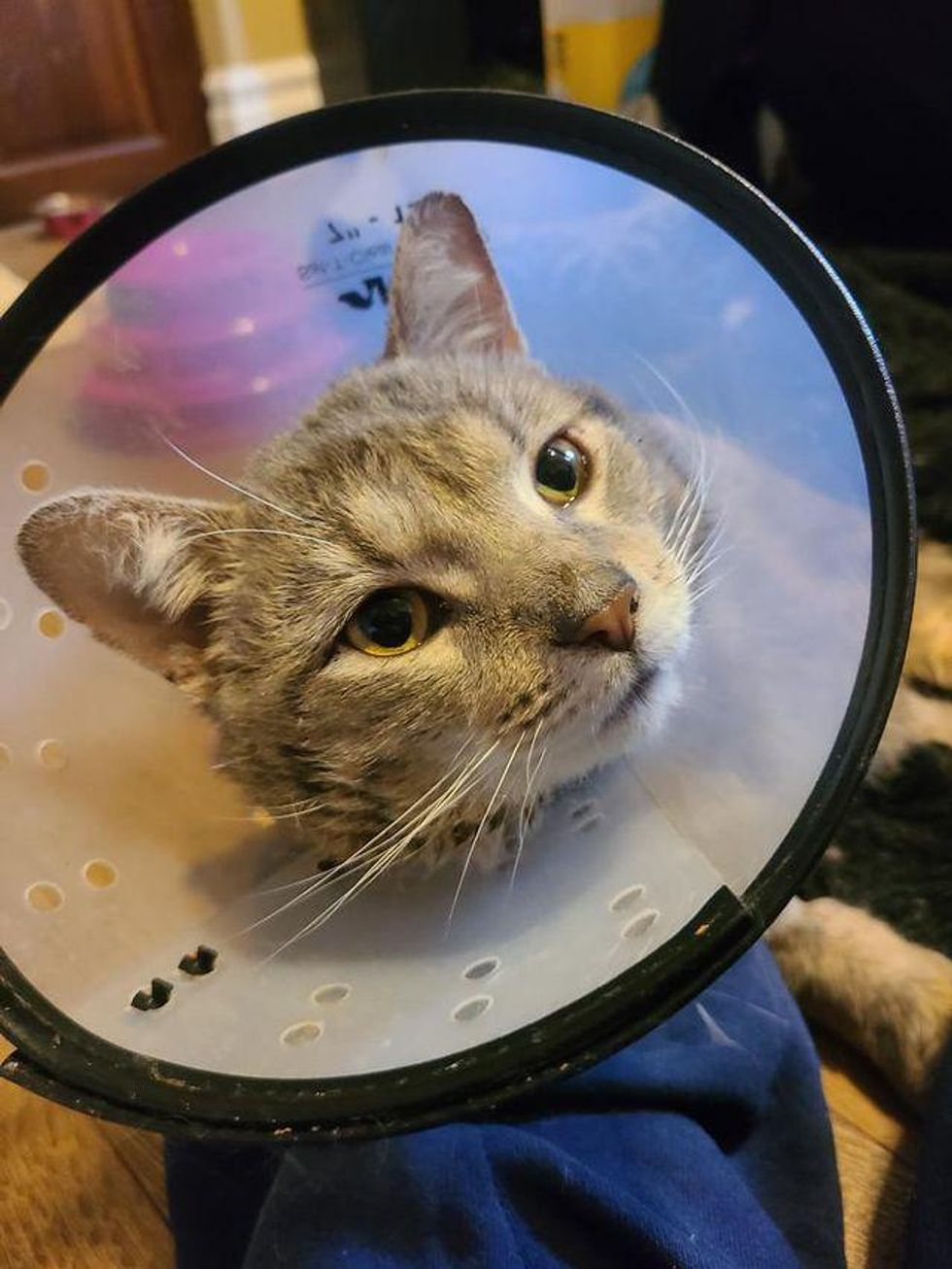 The tabby has become a cuddle bug and wants to be petted and dotted all the time. There is no personal space in Chuck’s world. It will lie over Lauren’s chest, just above her neck, so it can be as close to her face as possible.

“Without knowing what he’s been through, Chuck has such a laid-back personality. His favorite thing to do is just hang around. He also loves his cuddles and mealtime,” said Lauren.

“He’s a lot cozier now than showing me that he trusts me and shows me love back.” 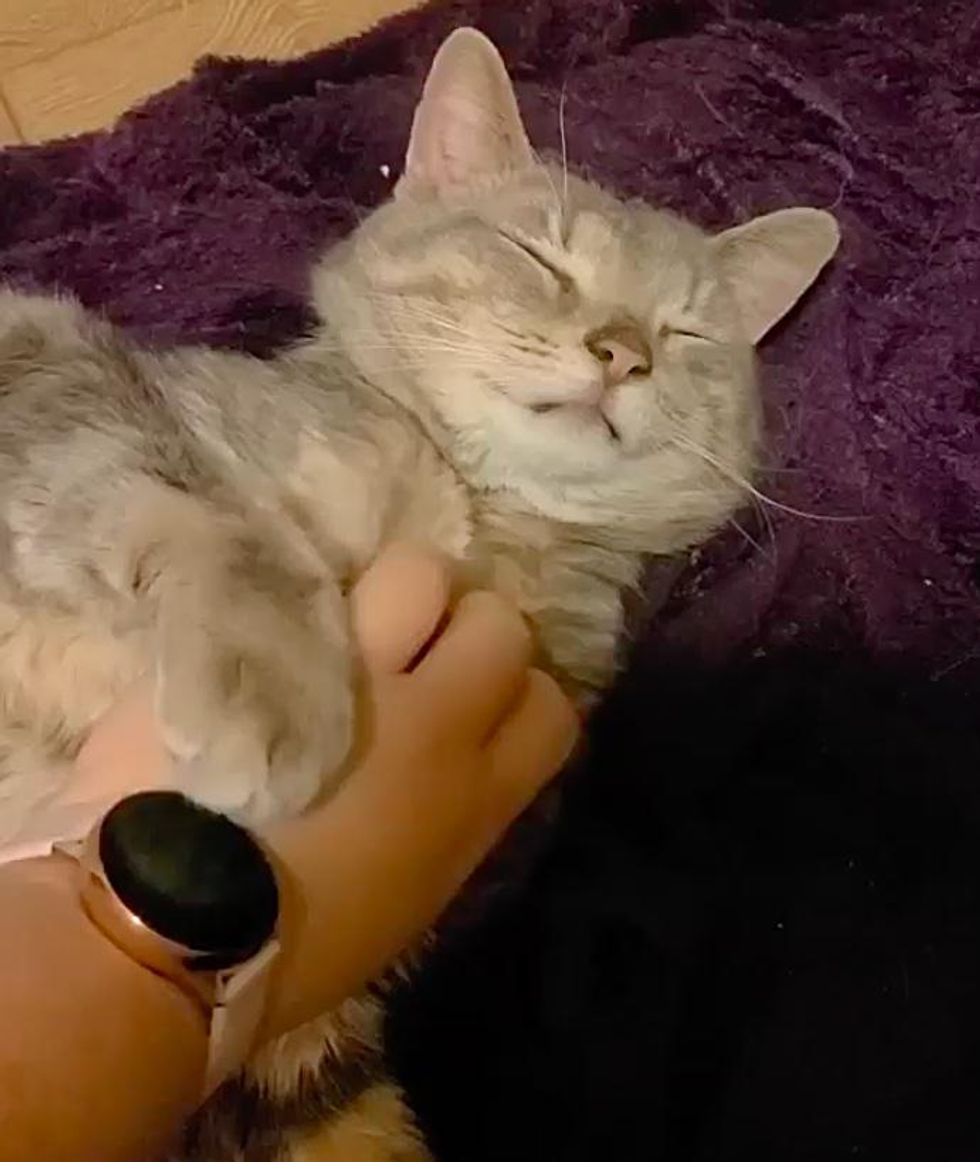 Chuck has become a love bug.

Lauren’s daily routine has changed since Chuck found her that day. She wakes up every morning to the kitty alarm Chuck set and tells her it’s time to feed him. Bedtime means cuddling time with a purring cat on the neck.

“He’s really goofy and overall I feel like he just wanted to feel safe and loved. I’m glad he chose me to provide this for him,” shared Lauren Love Meow.

“I don’t know what I did to be chosen by him, but I love being his person.” 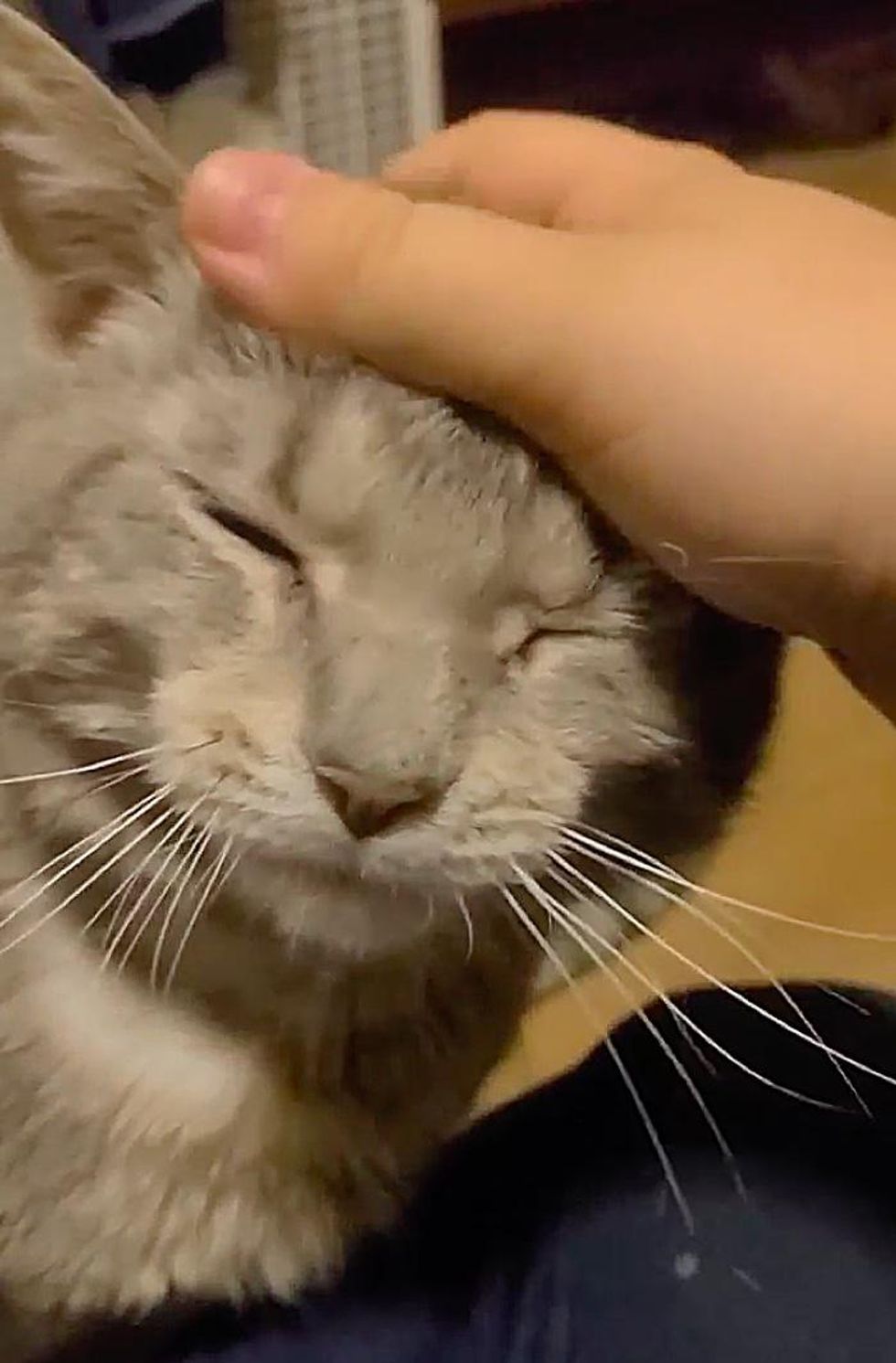 Related Story: Stray Cat brings her kittens to a family who has been kind to her and changes her life forever