A cat came back to the neighbor who had been kind to her so that her kittens would have a better chance of life.

Hazel the cat and her kittens

A family from Ontario, Canada was greeted by a cat in their garden one day. They gave her something to eat and she kept coming back. The friendly cat became a frequent visitor, digging at the screen door and “dancing” to get attention when hungry.

They later found out that the cat belonged to a family across the street and had been let outside despite the cold weather. The friendly neighbor did what she could to look after the cat and keep her warm and fed every time she passed.

The tabby fitted into the community of strays and ferals and had a litter of kittens that were unfortunately nowhere to be seen. She came back to her neighbor’s house one day in bad shape. They took her to the vet where she was treated for infections and wounds from being outside fighting other animals. 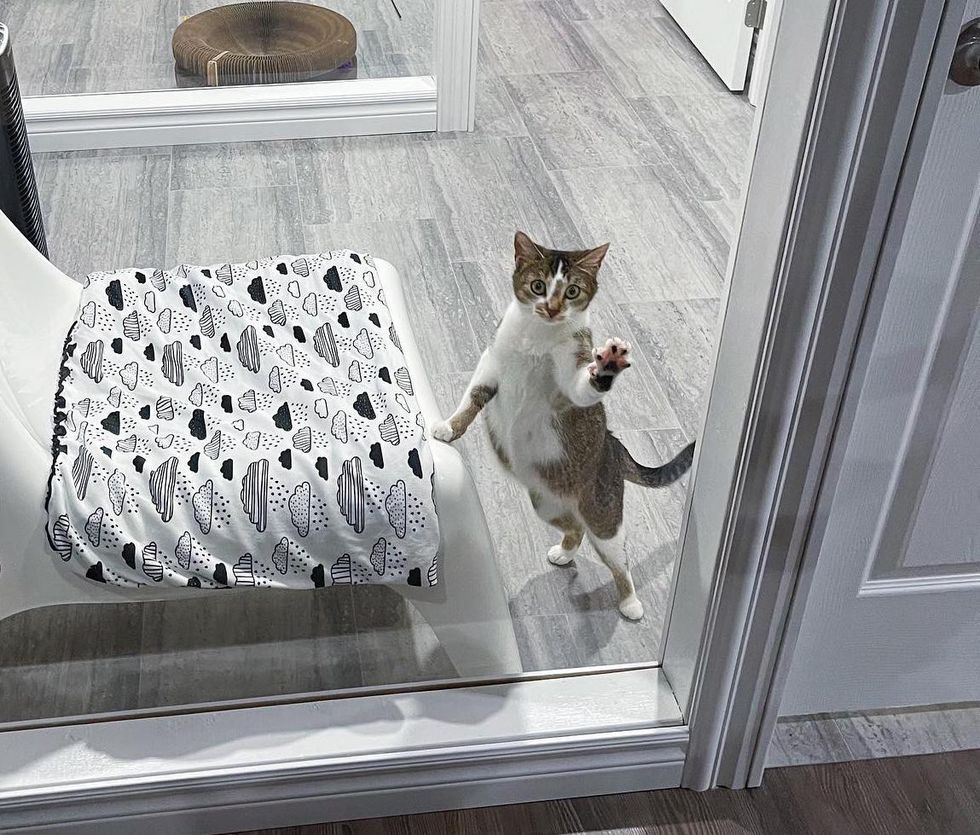 When she came back and appeared to be pregnant again, the friendly neighbor made it her business to take her to a safe place. They reached out to Mellissa, the founder of Tiny But Mighty Kitten Rescue, and placed the expectant mother in foster homes.

The cute tabby named Hazel was so happy to have all of the great food and convenience. “She was just as excited for the meal as she was for me. She took a few bites, came back to me for a stroke, and went back to eat,” Mellissa shared with Love Meow. 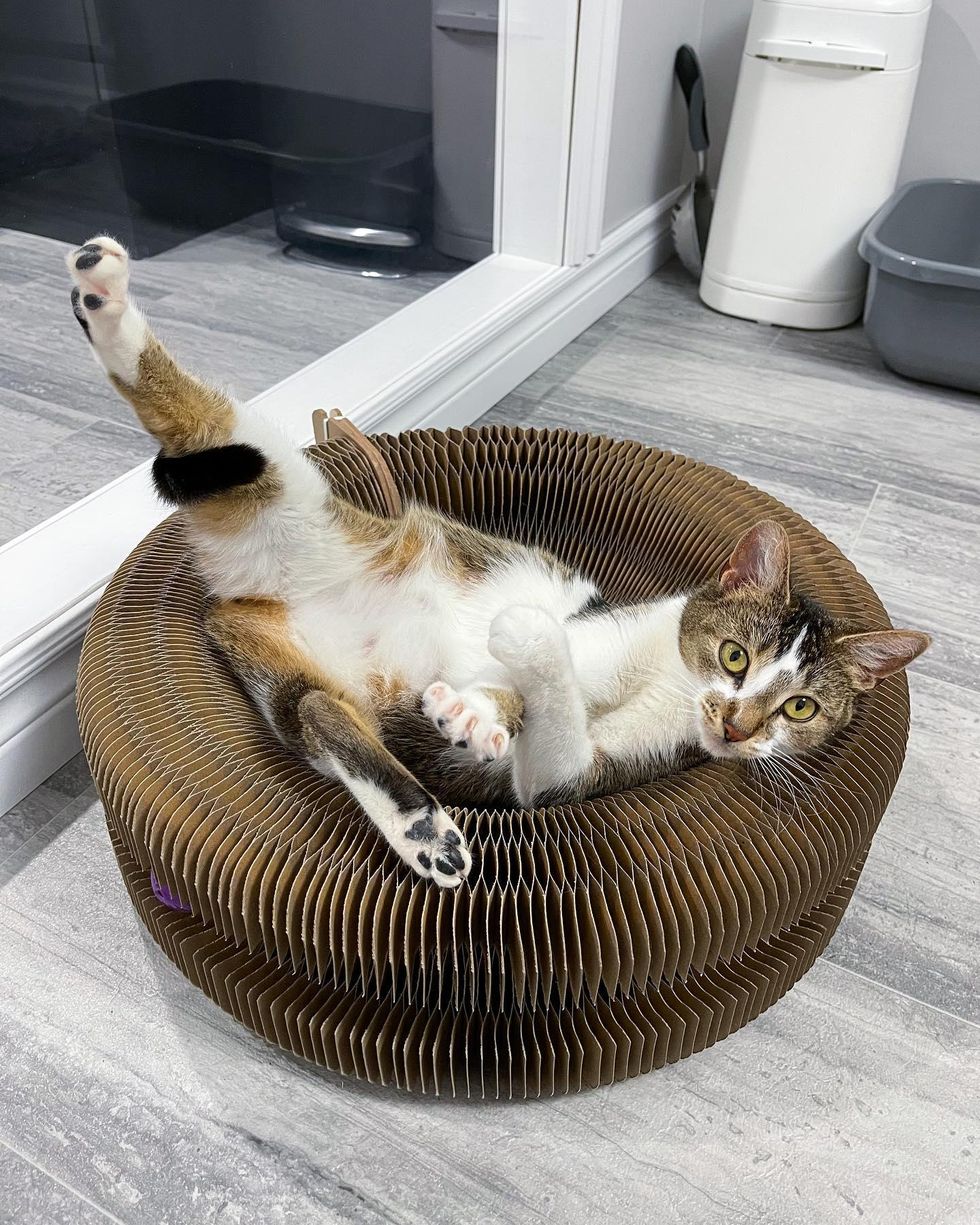 “She was such a happy girl when I brought her dinner and kept rolling over and stretching and showing me her stomach.” 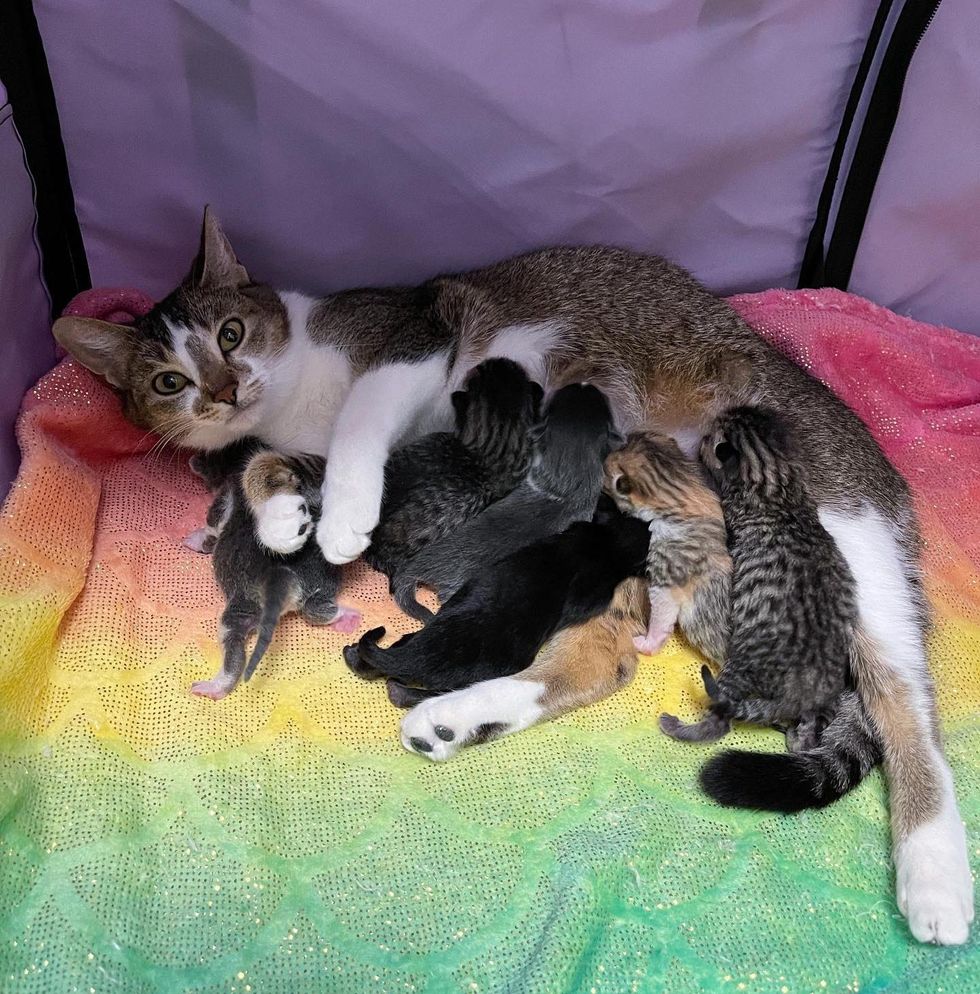 She ate to her heart’s content and cleared up the bowl shortly after it was full. Mellissa made sure the mother had supplies at all times and came to offer love and support throughout the day.

“Hazel is the best mom and one of the cutest cats I have ever met! She always takes care of her babies and after every little squeak she has to look after them,” Mellissa told Love Meow. 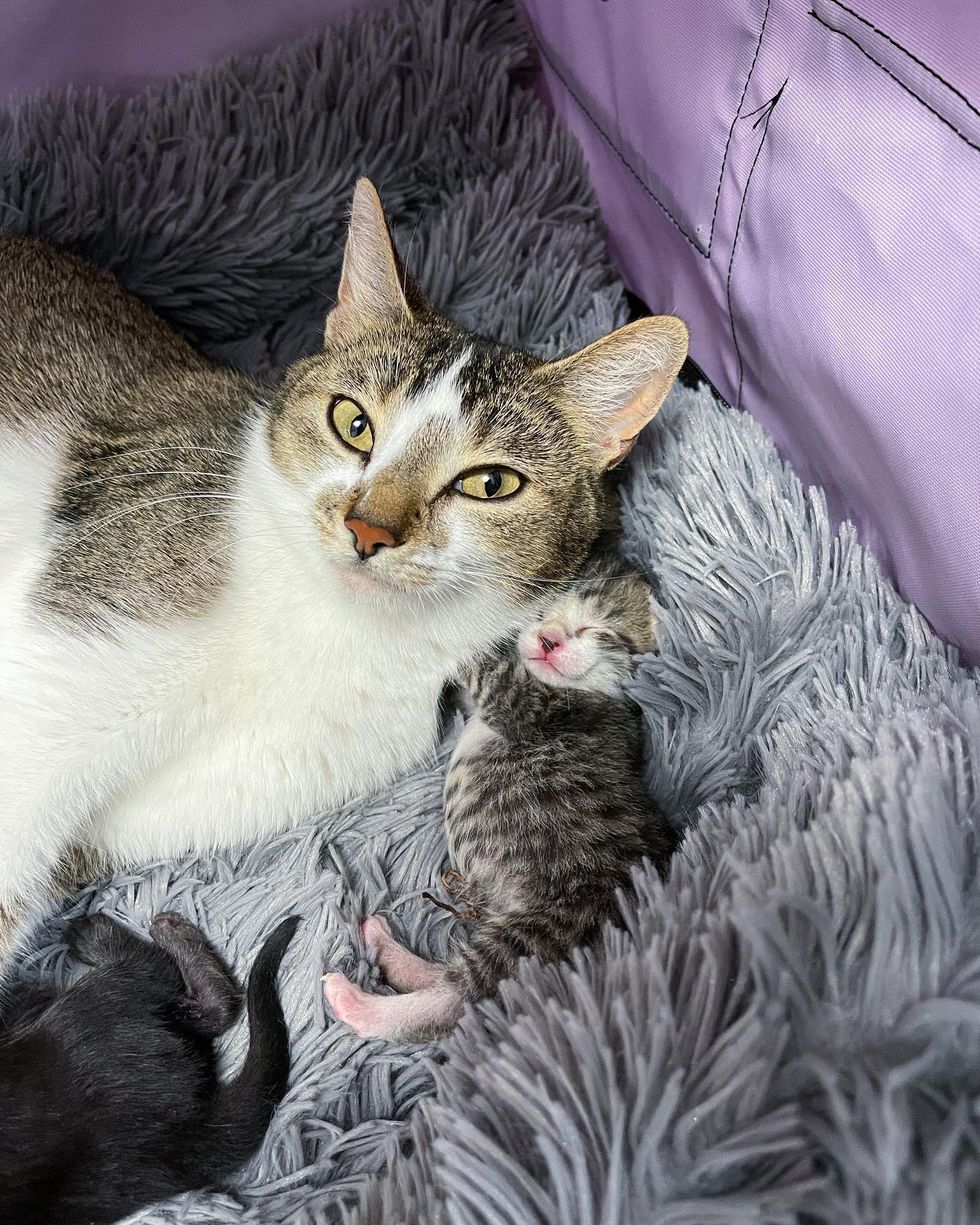 Hazel snuggles up to her precious baby

At 11 days old, the kittens noticed Mellissa was in the room and wiggled and waddled over to get attention.

Maci, the kitten with tiger-like markings, was the cheeky one of the group. She tried to run before she could run without wobbling. She quickly figured out how to purr and had a lot to say. “She’s definitely the first baby to show her personality.” 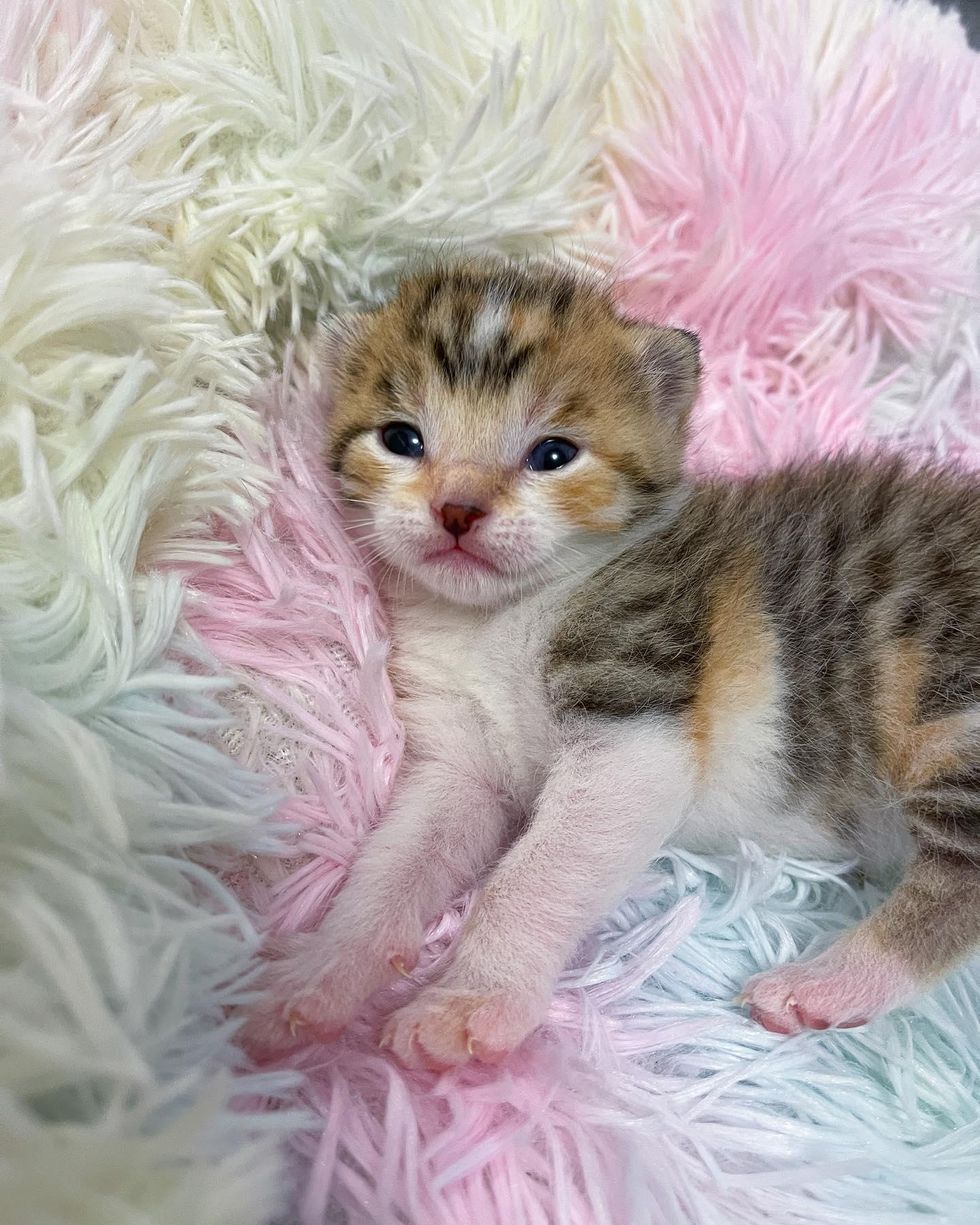 Maci the kitten with beautiful markings

As soon as they were large enough to move into an upgraded suite, the kittens were immediately on the move, trying to check every nook and cranny.

“They are the bravest kittens I have ever had in my care. They are fearless and ready to explore!” 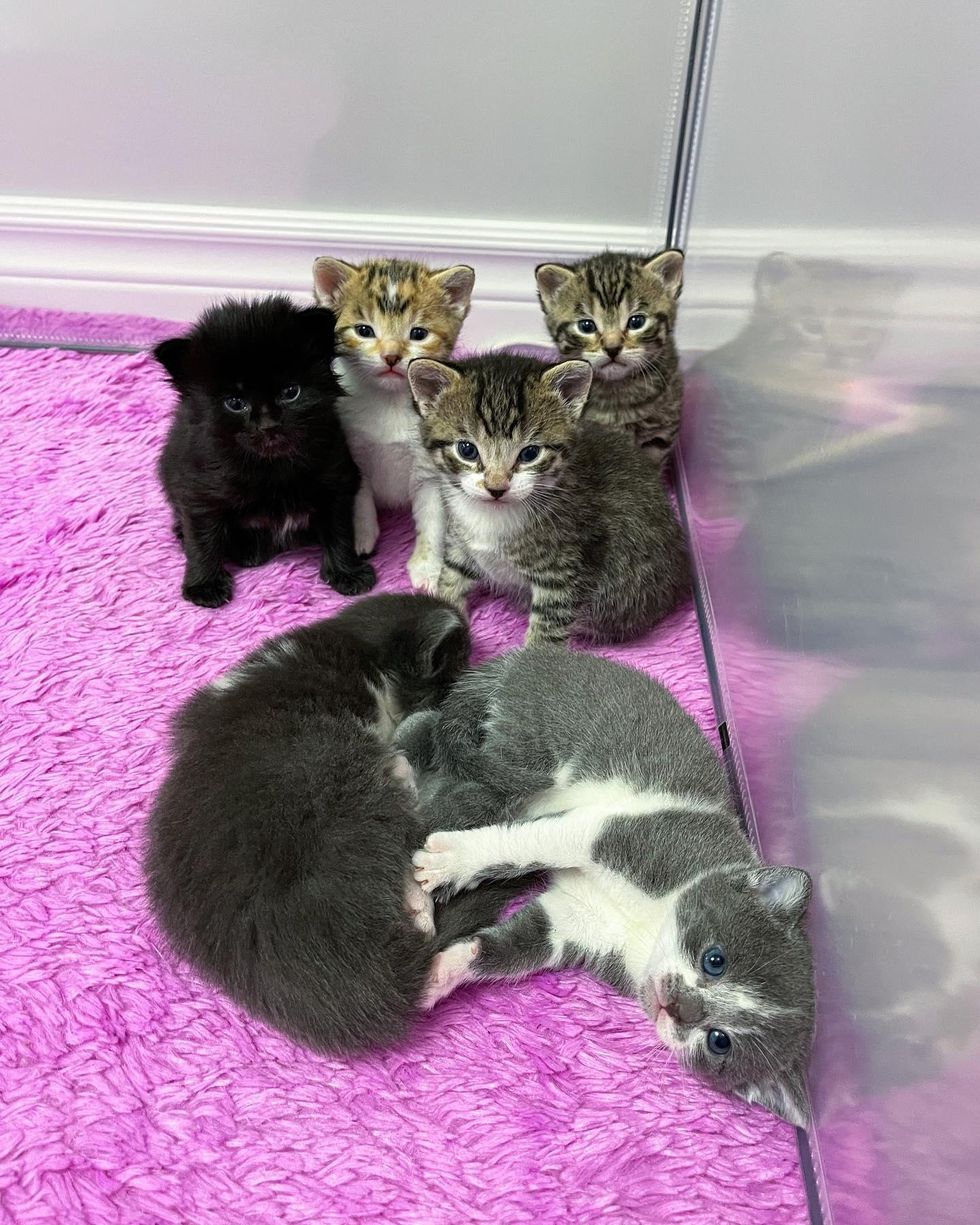 Momma Hazel keeps a close eye on her babies and comes running when she hears their screams. She takes care of them from head to toe and wrapped her arms around them so that they cannot escape the bath.

“I’m so grateful that she didn’t have to give birth outside on the street, in the snow or in the rain. She will eventually be neutered and never have to worry about being pregnant or giving birth again!” 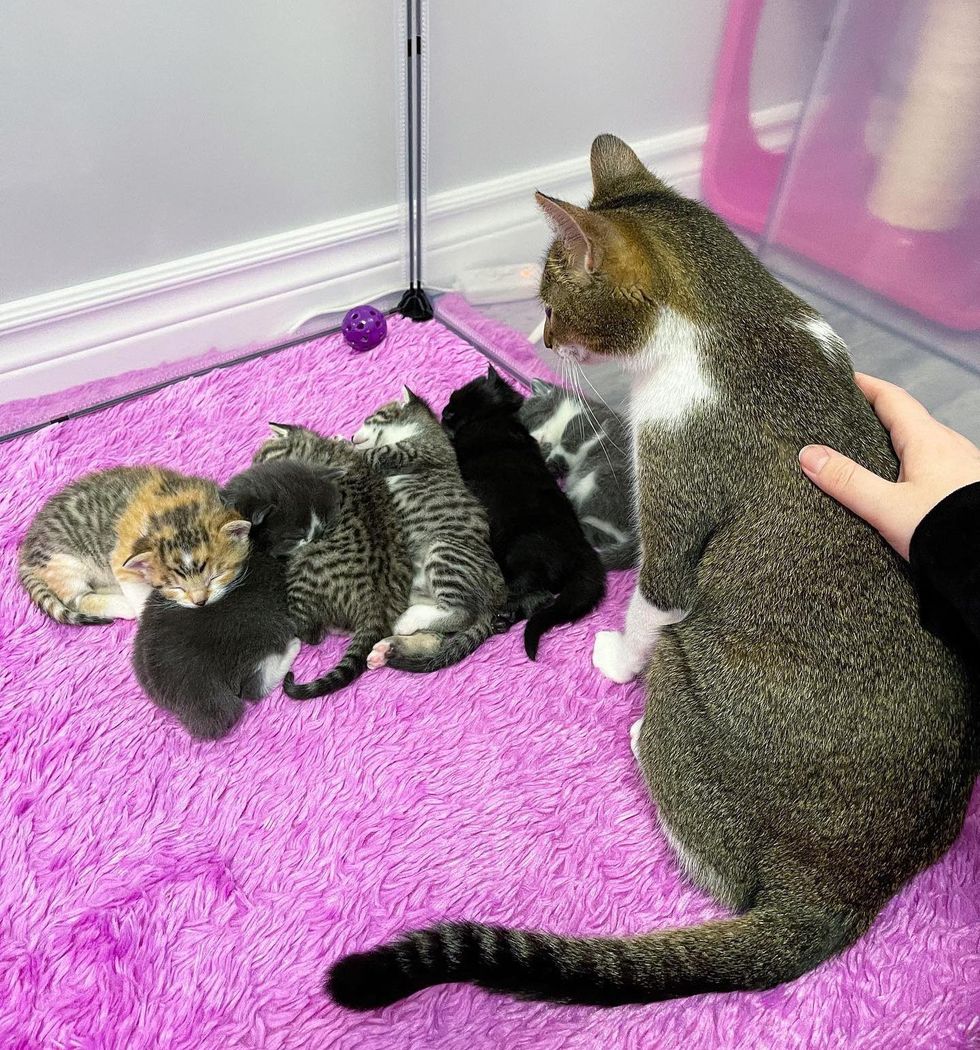 Hazel the cat is a wonderful mother

Conner, the tabby, was the first baby to try kitten food after watching his mother eat from a bowl.

It wasn’t long before Maci followed and learned to eat like a big kitten. One thing led to another, Evie, the gray and white kitten, also joined the breakfast club. 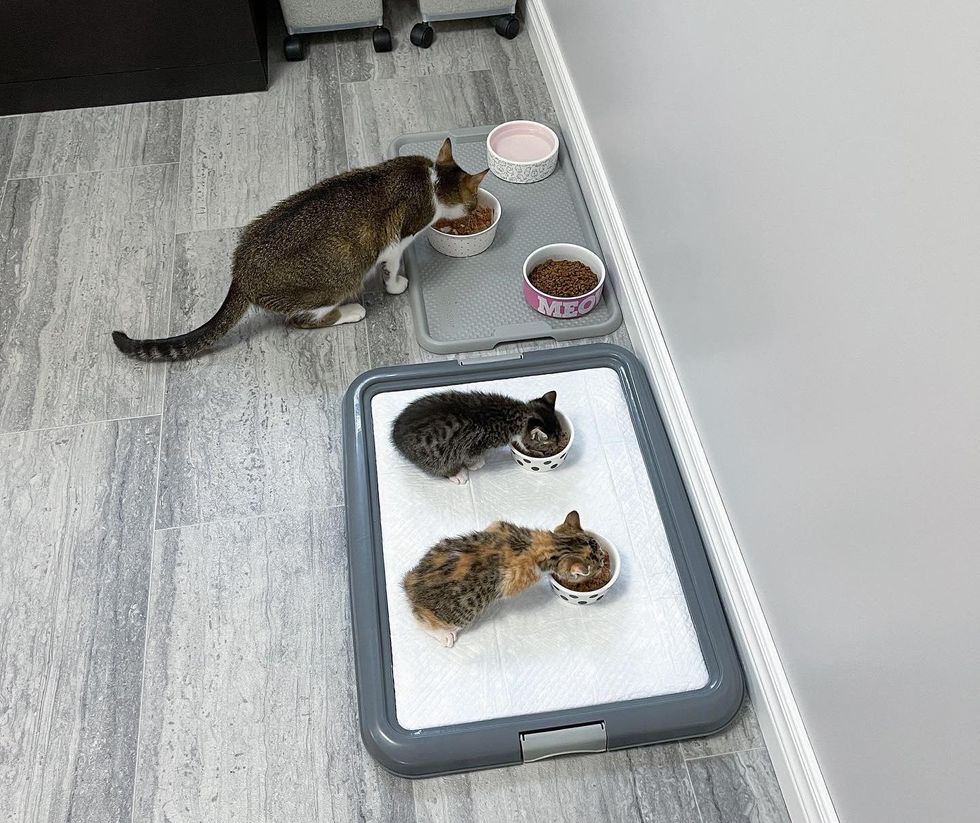 At five weeks of age, the kittens will thrive with their infatuated mother cats. Whenever they receive a new toy or bed, they are enthusiastic about trying to put it to good use.

Nothing beats a warm and purple cuddly puddle. 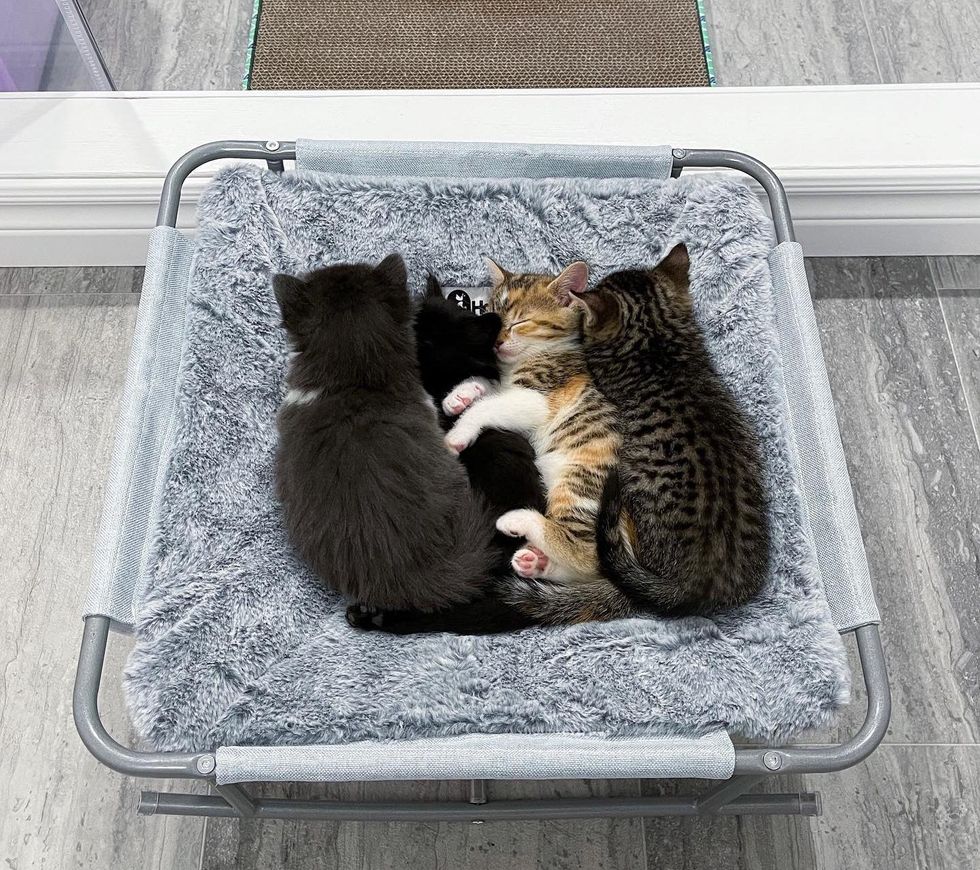 Maci, who has taken on the role of big sister, was the first to take a nap on a large scratch and in the new hammock. She quickly got her siblings to participate. 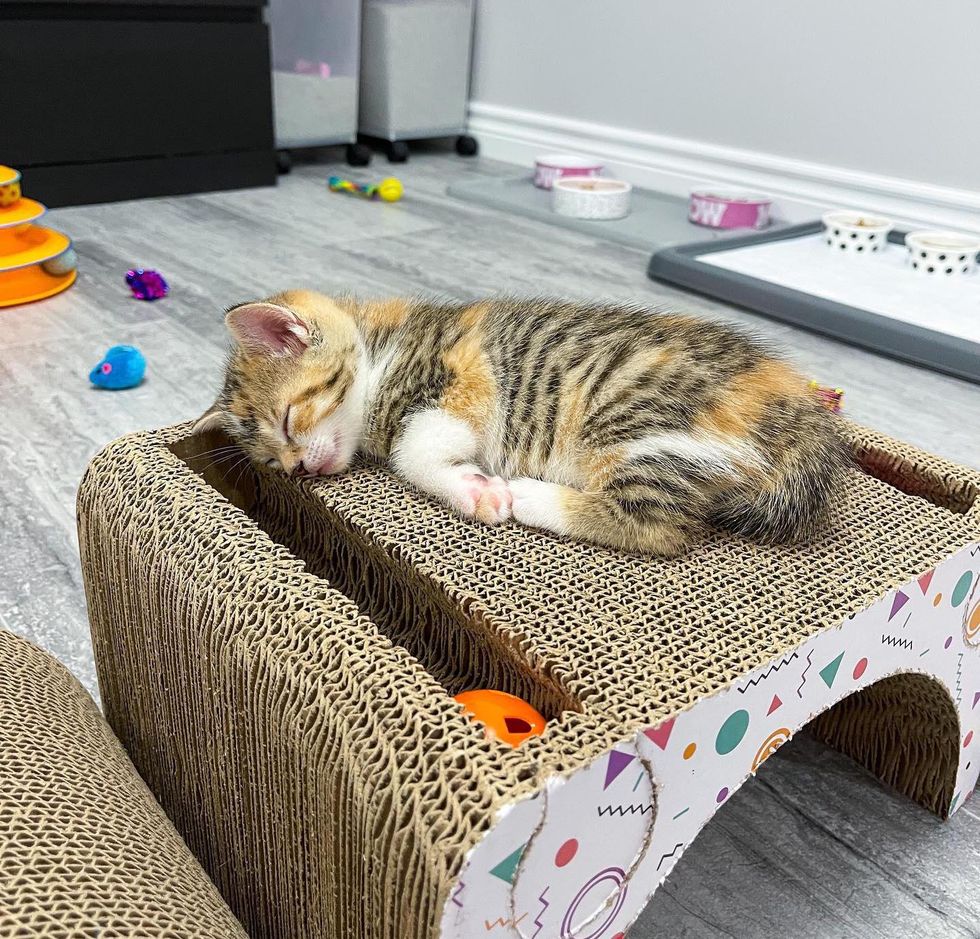 Maci the kitten has a great personality

Coco is the smallest of the litter, but what she lacks in size she makes up for in personality.

“She’s the loudest of them all and will meow especially when she hears me walk into the kitten room,” Mellissa told Love Meow. 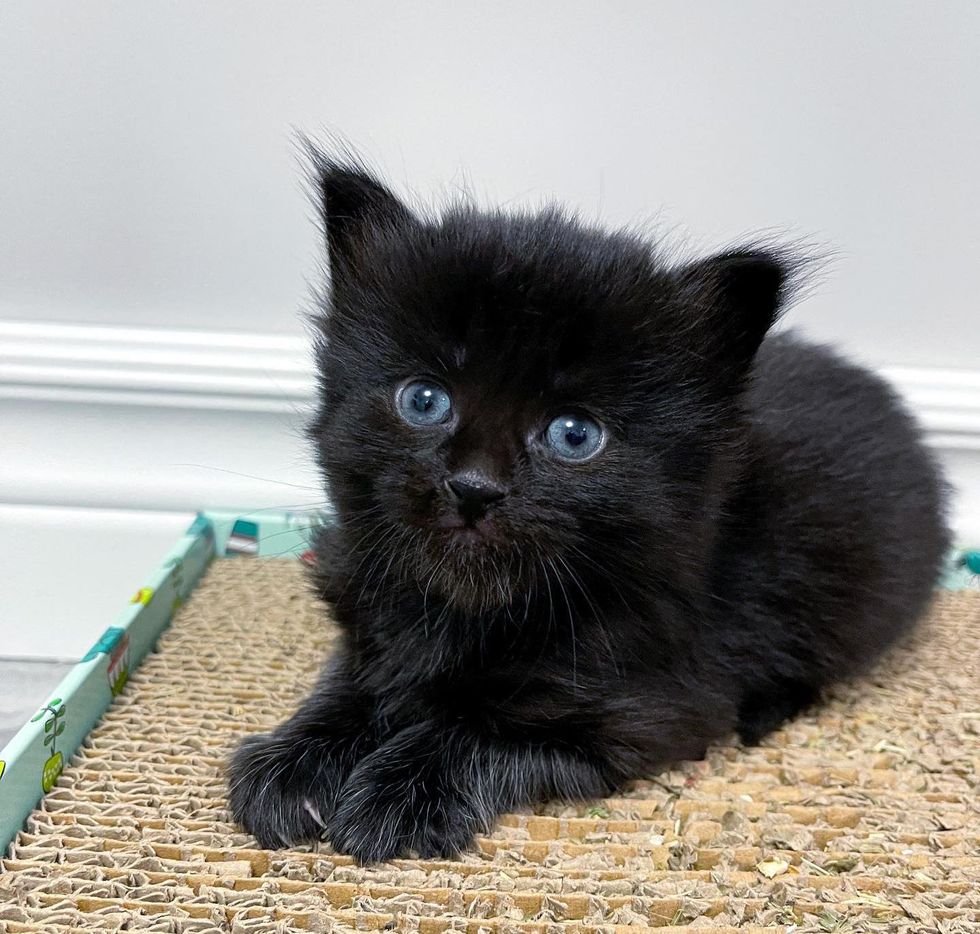 Coco is the rest of the litter

Hazel is very happy to be inside with her kittens and to have a loving foster family who will take care of all of their needs.

Whenever she takes a break from her motherly duties, she comes to Mellissa for attention and pets and soak up love. 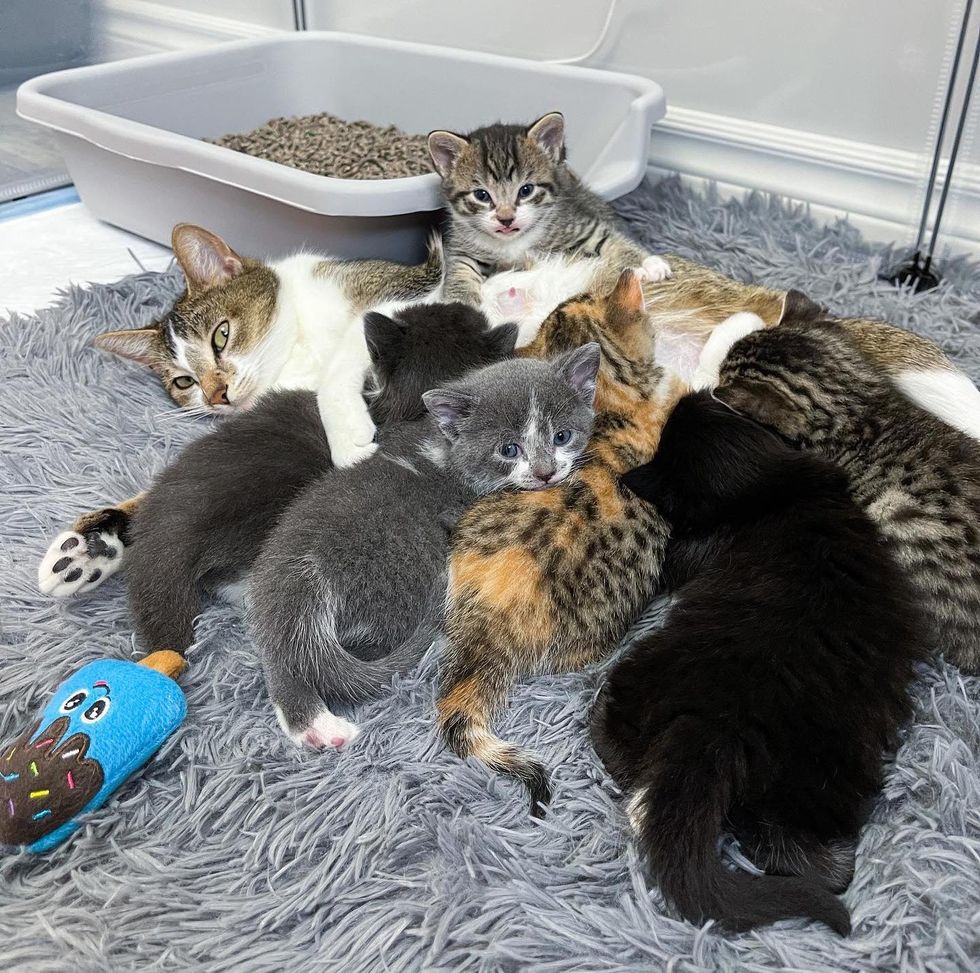 Related Story: Cat Left Kittens on Family Porch and came back with 4 another two months later

Why does my cat sneeze a lot? What should I do?

Why does my cat sneeze a lot? What should I do?